Permission to use Walter Wendt's story has been granted by the Lakeland Times Newspaper, located in Minocqua, Wisconsin.

Walter Wendt still remembers every minute of his Naval career

A young Walter Wendt posed for a picture as he prepared to defend his country as a member of the Navy. 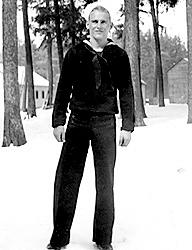 Walter Wendt graduated from Rhinelander High School in 1939 and then joined the Navy.

“It was just about the time Hitler went crazy and there were less than 100,000 in the Navy,” said Wendt.

After completing his training at Great Lakes, he was assigned to the USS Helena, a light cruiser that had been commissioned in September of 1939.

The Helena was in Pearl Harbor on Dec. 7, 1941, and was the first ship torpedoed.

“We were berthed next to the USS Ogilla, and the concussion from the torpedo hitting our ship split the Ogilla open. It was pulled to the dock where it sunk.

“There was a big hole in the Helena and it had to be taken to Mare Island Navy Yard in Vallejo, Calif., for repair.”

When the ship was back in service it was sent to Guadalcanal in the South Pacific, arriving a few days after the invasion.

“There were many battles and bombardments around.”

“After completing those battles we consolidated - we had three cruisers and four destroyers - and moved up to the Central Solomons to New Georgia Island where the Helena covered the landings at Munda.

“After covering the landings we were heading for home when word came from one of the coast watchers that 10 Japanese ships were coming into Kula Gulf,” Wendt continued. “Then two left the group which made our odds better. It was now eight to seven.

“The Japs were coming fast and at 1 a.m. the Helena was hit with three torpedoes in just a minute or two. The first torpedo took 165 feet off the bow, another cut the ship in half. Then the bow popped up again, but the ship sank in 25 minutes and we lost 198 men. Some of those who survived were in life rafts. I had a life preserver on - and I still have this life preserver today. It had a tube to blow it up and an exhaust valve.

“I could see the battle going on, but I had no idea who was winning. There were shells bouncing close to all of us. Then for some reason the Japs quit firing.

“My life was saved because I was working in the engine room in the back of the ship when that first torpedo hit and took out the forward engine room.”

It was while he was in the water that Wendt made a lifelong friend, Cobden Hitchon. He shared his life preserver with him.

“We became friends for life. He finally settled in California, and I had gone to visit him three or four years ago. He died a day or two after I saw him.”

Two destroyers were sent out to pick up survivors, but those in the water didn't know if they were American or Japanese. All they could see were the search lights.

“Finally they came near enough and we could see they were United States destroyers, the Radford and Nicholas. We swam near the Radford and those on board threw ropes over the side to pull us up.

“There was one problem - our bodies and hands were so greasy we couldn't hold on. I tried, but would get up a ways and then plop back in the ocean. Finally I twisted the rope around my wrist and made it.”

The deck of the ship became so slippery from the oil of those rescued that the men couldn't stand up.

“My buddy and I finally sat down under a 5-inch gun. Then some men came to man the gun so we took off. It wasn't long before a torpedo hit right where we had been. It threw the men overboard and they were sucked through the current into the screws of the ship.”

Officers knew that any ship left in the area would be vulnerable when the sun came up, so the Nicholas and Radford took off.

“You know six destroyers equal the weight and size of one cruiser . At the top-speed, with which they left the area, the destroyers leave a 12-foot rooster tail behind, and that could be seen by the Japs come daylight.”

They went to Russell Island and Tolagi. There they boarded the cruiser Honolulu and took it to a station in New Hebrides where there was a construction battalion camp.

“Then we boarded the Lew Wallace, which was an old liberty ship, and headed towards the Golden Gate. It was a voyage of 23 days, and we reached San Francisco on July 6, 1943. We were then given delayed orders for 25 days and I was able to come home for a 20-day visit.”

Following his leave, Wendt was given orders to go to Newport News, R.I., and board the USS Houston which would be commissioned in December of 1943.

“One-hundred-eighty-seven men from the Helena went to the new Houston cruiser. We took a shake-down cruise to Trinidad through the Panama Canal and joined the fleet at the Marshall Islands.

“By this time the Navy had grown to the most powerful fleet there ever was. We had 100 warships in four sections, all under Admiral Halsey.

“We then headed to the Mariannas for what we called the “turkey shoot.” We shot the Japs down like flies. We went to Saipan, Guam, etc. We went to Bonin Island where the flag-raising at Iwo Jima had taken place.

“Wherever we went we had no problems with enemy aircraft. The Japanese were beaten in the air. We had a formidable fleet and they had no air cover.”

They then headed to Formosa (Taiwan today).

“We berthed next to the Canberra and at noon changed positions with them.

“At 10 p.m. we took a torpedo. Then the Japanese attacked again two days later. By now, we had only half of our crew left, for after the first torpedo the officers said we could abandon ship and about 500 of our 1,000-man crew had done this.”

Wendt, who was a chief machinist mate, again avoided being hit for he was in the aft engine room and the ship was hit in the front.

Finally the cruiser Santa Fe showed up. The Japs tried to crash into the ship with one of their ship, but missed and crashed alongside it.

“Again the men were told they could abandon ship, but I stayed with the ship and we went to Ulithi Island. It was here that Admiral Halsey gave out some medals. I was one of three crew men from the Houston who got a Bronze Star.

“We took the ship to Admiralty Island which had a floating dry dock. It was the marvel of the South Pacific. The USS Reno and USS Houston were both in there together for repairs and there was room for another ship or two. Some 1,200 men lived on the dry dock. They were all specialists at their trade.”

While the ship was being repaired the men were sent back home by way of the Panama Canal to the Brooklyn Navy Yard.

“My career ended on the dry dock. While I was at home and the ship still under repair, the war ended.”

In September of 1945, Wendt was discharged and came home.

“I decided against using the GI bill. I just wanted to stay in the woods.”

He found work logging, worked in the sawmill and, in 1956, took over the resort.

In 1972 he married Ina and they made a wonderful life together. However, in 1992 she was diagnosed with Alzheimer's and he took care of her for three years before she died of a stroke in July of 1995.

“I still remain in our home and am getting along pretty good. Ina and I used to travel in the winter, but now, because of my eyesight (I'm considered legally blind), it is more difficult to travel.

“I do travel some to attend ship reunions, etc. Last fall I went to Sacramento for a USS Houston reunion. I also traveled to a wedding in Denver.”

His friends help out. Once a week he is picked up to do his shopping.

“I like it in summer when there are lots of people around. I still run the resort, but rent mostly to groups who take several cabins. It is impossible to sell this as a resort for the cabins are too cheap for the land they sit on. The land is valuable and I have sold off a few of the acres.”

As Wendt looks back on his time in the service he considers himself quite fortunate. Although he saw lots of action, he came through the war without a scratch.

And, he has absolutely no regrets on his decision to return to the woods at McNaughton and, at 86, is still enjoying his life on the former family property.

To view a recent picture of Walter, click Here.

The following are Walter's WWII awards.