Permission to post this story has been granted by the author Joe W. Desch and the US Navy Cruiser Sailors Association.
The story recently appeared in the USNCSA magazine in their SPRING 2005 issue.

She was fleet and lean, 10,000 tons, with a 100,000 h.p. heart and fifteen 6-inch guns for her voice. Only her boxy stern, where she could carry eight planes and the crane cocked on her fantail, marred her clean lines. She was waterborne in the murky tide off Brooklyn, New York in August 1938, while Japanese "fishermen" could still map soundings off U.S. Coasts. She died in the early dark of July 6, 1943, deep in the Kula Gulf between New Georgia and Kolombangara in the South Pacific. Her pallbearers: the eleven Japanese cruisers and destroyers which had gone down under her guns in her short career of headlong action.
That was the light cruiser HELENA.
Putting in at Montevido on her shakedown cruise in 1939, the HELENA got first look at war when she passed close aboard the German pocket battleship GRAF SPEE, scuttled in the bay. Her second look, closer, came at Pearl Harbor. She was hit, and that day her crew became a fighting team. Her 5-inch antiaircraft battery, her light weapons spoke with the trained, nervous insistence of a machine. HELENA knocked down six Japanese planes that climactic day.
Patched up at Pearl Harbor, she limped to Mare Island, California for permanent repairs. With new men aboard, she sailed for the South Pacific, trained incessantly at the job her men prized the most ... It was gunnery. She made two runs to Guadalcanal, served as an escort for the carrier HORNET, then joined the task force which included the WASP. The HELENA was there when the WASP was torpedoed, took aboard many of the survivors.
On October 11, 1942, the HELENA steamed into her first major engagement. She was part of the task force ordered to intercept the strong Japanese force moving to reinforce their units on Guadalcanal. In the Battle of Cape Esperance, the U.S. force turned back the Japanese's, sank four cruisers, four destroyers and a transport. The HELENA cashed in then on her gunners.
At 14 minutes before midnight, her batteries spoke. Her target was a Japanese destroyer. Just 98 seconds later it was ablaze. As the enemy ship exploded and sank, the HELENA swung her guns on a cruiser. Four and a half minutes later the blazing cruiser sank. The HELENA turned on another cruiser slugging it out with a U.S. cruiser near by. The enemy went down. A Japanese destroyer slipped in close, let go a torpedo. The HELENA dodged, wheeled, finished off the attacker, which was already under fire from another U.S. ship. The enemy fleet turned and fled.
The HELENA score in her first battle: Four targets, four ships sunk with the assists by other U.S. craft. On the HELENA: No hits, no casualties. She cruised with a task force looking for the Japanese, escorted convoys, dodged a second torpedo attack ... This time from a submarine. She put in one busy day silencing shore batteries which had bracketed U.S. transports unloading at Guadalcanal. The Japanese sent over bombers. The HELENA got four of the nine shot down by the U.S. Ships. 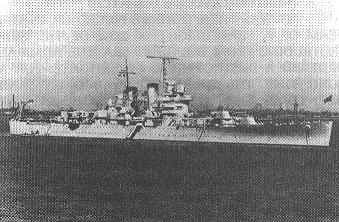 The decisive Battle of Guadalcanal began in earnest that night. The HELENA was the first to sight the enemy ships. A Japanese cruiser slashed the darkness with her searchlight, caught the HELENA, opened fire. The HELENA was already on the full target. She fired from the hip: a full salvo. The Japanese burned like a torch, lighting the way for the U.S. destroyers. As the Japanese cruiser began to sink, the HELENA's secondary battery pounded down a destroyer. The Japanese began a withdrawal. One of their cruisers was slamming shells at the SAN FRANCISCO, which had tangled with a Japanese battleship and taken the salvo which killed Rear Admiral Daniel J. Callaghan and her skipper, Medal of Honorman Cassin Young. The HELENA sank the cruiser and a destroyer, and shot up three other Japanese ships. The beachhead in the Solomons was finally secure. The HELENA steamed on to her destiny. She pounded enemy airfields, troop areas, shore batteries. Down in her log went names now legendary: Munda, Vila, Kolombangara, Enogai, Inlet, Bairoko Harbor. Finally came the battle of Kula Bay, a turning point which cost the U.S. One ship: The HELENA.
The Japanese, landed troops to reinforce Munda, were caught flatfooted. At 1:55 a.m., July 6, 1943, the battle was joined with the "Tokyo Express." Torpedoes got the HELENA. Her main battery had been trained on one of the big Japanese ships. She opened up with a blinding burst of flame, sank it. Her secondary battery smashed one Japanese destroyer then another. Other U.S. Ships were firing salvos, but the HELENA chose to use "Continuous Fire." Her gunflames flared from stern to stern. In the brief moments left of her life she loosed perhaps a thousand rounds from main batteries alone and her thunder could be heard for miles. Her bow had been blown off, but the remaining turrets were still blazing away. She was firing so fast that she was constantly lit up in the dark, "like liquid fire squirting from a hose." Then suddenly the Gulf was dark again. There were no more targets. They had been destroyed. The U.S. Ships moved off.
(NORTON-TAYLOR'S DISPATCH)
"IT WAS THEN THAT WE PICKED UP, IN THE BEAM OF A SEARCHLIGHT, A BOW OF THE SHIP PROTRUDING FROM THE QUIET SEA. THE ADMIRAL ORDERED A DESTROYER TO INVESTIGATE. FOR A LONG TIME THE DESTROYER WAS QUIET, AND SILENT, AS SHE ALSO THREW A BEAM. THE ADMIRAL KEPT ASKING: "WHO IS IT?, WHO IS IT? ACKNOWLEDGE. ACKNOWLEDGE."
HIS IMPATIENCE WAS PLAIN OVER THE TBS (Talk-between-ships), LOUDSPEAKERS ON THE BRIDGES OF THE U.S. SHIPS AWAITING IN THE DARK. IT SEEMED AN UNCONSCIONABLE TIME BEFORE THE DESTROYER, HER SEARCHLIGHT STILL PROBING, ANSWERED: "I'M SORRY TO REPORT IT IS FIVE ZERO." That was the HELENA. She had gone down in 20 minutes, but her bow floated a little longer. Then it, too, was gone. She sank gently, without exploding, the thick oil bubbling black as the Pacific night from her shattered hull. The men went over the side, into the oil. There was no fire. 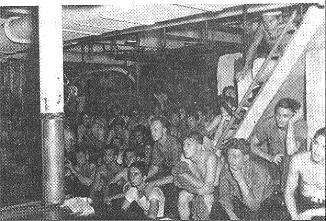 Survivors of the HELENA, on board the
USS HONOLULU (CL-48) after their rescue. U. S. Navy

The Navy Department said nearly 1,000 men of the HELENA complement "stand fit and ready to fight again." Some of them, oil-smeared and haggard, were picking up near the ship's grave. Others got to nearby islands, lived with the resourcefulness of good fighting men, were finally retrieved. They went to other ships, other stations. BUT THEY ARE STILL HELENA MEN, ALWAYS WILL BE.
According to J.W. Desch, a survivor of the Helena sinking; at the time of the Helena's sinking, it was generally acknowledged that she fired more rounds in enemy action than any other ship in the history of the U.S. Navy - 3460 rounds of 5-inch and 7179 rounds of 6-inch, for a total of 10,639.
Submitted by J. W. Desch. Reviewed and corroborated by Morris Kleckner, also a survivor.