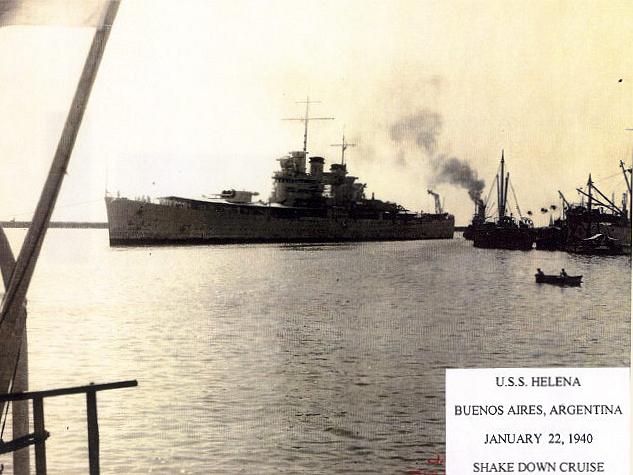 The above picture donated by Charles McClelland, USS Helena CL-50.

The story that follows has been copied from "Our Navy" Magazine dated First of May 1940.
Provided by George Del Gaudio

LEAVING the Times Square bright lights on December 21, 1939 for the Holidays in Annapolis, the HELENA started on her shakedown cruise to South America and Neptune's Royal Realm with over four hundred pollywogs to be worked over.
The HELENA spent four days in Annapolis, with all the recruits wishing for last year's Santa Claus, and four days in Norfolk to take on aviators, last-minute supplies and "Bunny" Park's cargo of jute boxes, saxophone tooters and sundry other rug cutters who turned out to be one of the high-lights of a very pleasant cruise. January 3rd saw us off to a warm sojourn of two days in Guantanamo to paint, scrub and hoist a few mugs of Americano beer-the last good beer to be had until anchoring off Deer Point on the way home.
Learned that Pat Moonan was still alive and turreting on the Wichita. Hadn't heard of him since he was skipper of Number One of the SALT LAKE CITY ''way back when a 10,000 tonner was a novelty. Charlie Freeman stoking in the Vincennes and getting sentimental about the Richmond. Hicacal seems to be getting a favorable play now that Guantanamo sea duty is more popular than ever.
No sooner did the HELENA get stretched out on the long drag to the land down under, the recruits began showing up at all meals and feeling salty. Smooth sailing prevailed for a few days and the Iron Men of the Old Navee noticed nothing amiss other than an unusual number of flying fish and Portuguese men-o'-war. Gradually, however, the atmosphere became more tense and certain low-lifers began to sneak around and act as if a kittenish grin was a passport Foyal immunity. Rumor was rampant that the head, brig and CO2 locker were going to be jammed with loyal subjects of Davy Jones before the final atonement. Like all such low and nefarious mutinies this nasty plotting was quelched in the bud very effectively the night before by the flying wedge method employed by the Rex Squad of The Neptune Vigilantes. A few arms,legs and scalps were swept up after "The Battle of the Brig" but than numerous honorable and life-long scars, not a man managed to lose his head and the participants limped hack to their respective corners licking their wounds until further orders from the Briny Deep. Chief Boatswain Coffey, as Neptunus Rex, took over been Captain DeMott and issued stern and rigorous orders that kept the passageways practically cleared and even not jamoke was at a premium. Not a few rebels were handcuffed to bunks but the Royal Police maintained the strictest order throughout the night and kept the situation well in hand.
Sunrise of January 13 found the decks cleared for action with more lookouts stationed than Columbus had on the SANTA MARIA. However no reward of filthy gold was offered for the sighting of a landlubber's dream in this case. One peacoated and beleggined scum was heard to whisper that he would gladly swap his billet for a cool niche on the Marmerheim Line. Chief Gunner Anderson, Chief Gunner's Mate in 1904, with more trips across the Equator to his credit than a Marine has medals, had previously been elected Davy Jones and issued a set of hawser-hued whiskers, his physique and complexion being perfect otherwise. The ceremonies started with the usual fanfare and ruffles but the Royal Bears were champing at their bits, so things began to happen. Lieut. (jg) Folsom was the first initiate to go the full course. Commander Slingluff and Commander Maher (MC) got off with a severe bawling out from a bloddy bloke by the name of Novak. All eyes were glued to the final exit trying to get a check on what would transpire within the short period of incubation-and was it a honey! Polly-wog Folsom started out as a nervous, temperamental Seabiscuit and finally had to be pulled out looking like a ten-minute colt, only he did not have four legs to prop himself upright and had to be lashed down to keep the fire hose from washing him overboard. From there on it was a nip and tuck affair with all hands emerging better versed in the art of being a good and under-standing shipmate.