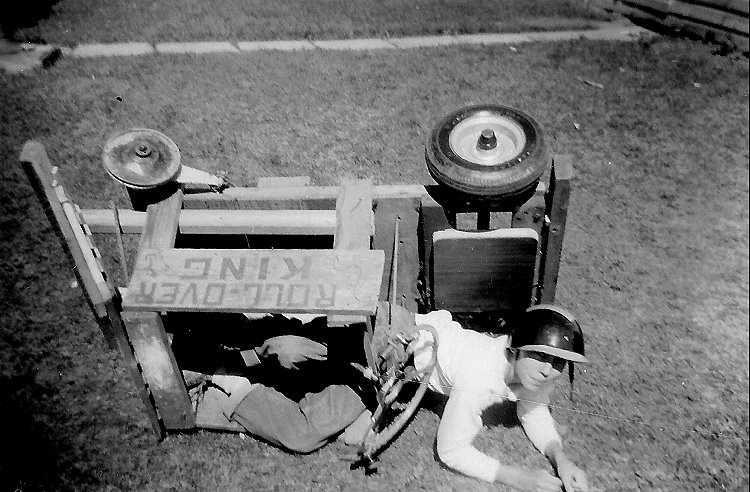 Don Weinfuther in our "Roll Over King" cart.

For some excitment, we would ride the cart down the hill next to the old high school.
As the cart picked up speed, near the bottom of the hill, we would turn the front
wheel sharply in one direction or the other and try to flip the cart over.

Many times this procedure did not work. Then we came upon the answer---quite by accident!
One time I rode the cart down in reverse and BINGO!! Over it turned. Note the rear heavy dolly wheels.
This is why the cart would flip on its side. Ah yes, fun today is a different story. But we did have fun then. 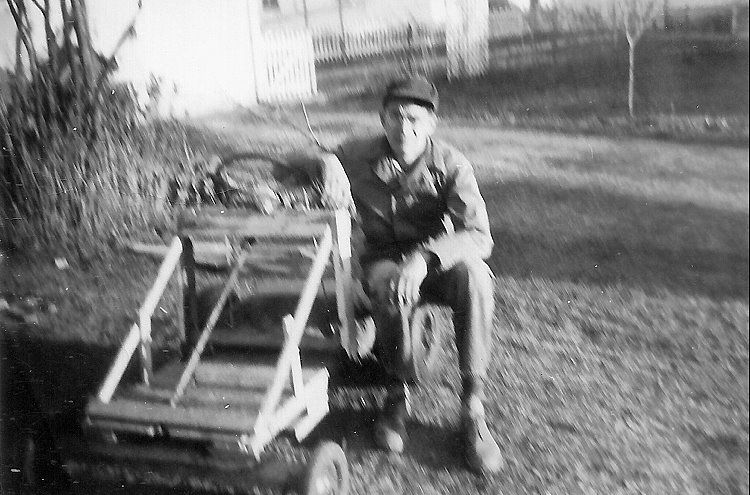 Dave Brouchoud in one of our earlier carts. (badly out of focus picture) 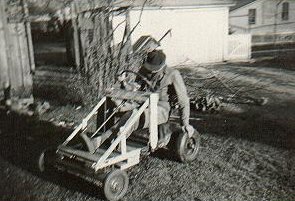 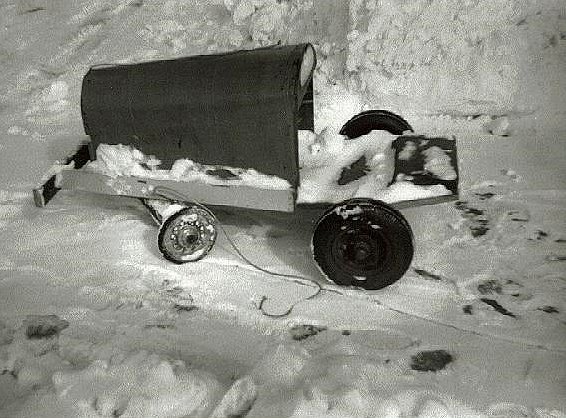 Rich Kaufmann's cart with rear dolly wheels donated by my Dad, Bernard F. Brouchoud
Story time! Each fall, there was a festival in Mishicot's Sportsman Park.
One of the activities for the younger set was a cart race down the hill into the park.
I learned that each year, a young man and his cart always won this race.
The reason was his father constructed a nice cart with wide wheels.
The wheels would ride the top of the sand on the hill especially on the turn at the base of the hill.
He always won the race!

Dad had a set of dolly wheels from when he pulled a house trailer.
These wheels were designed to take much of the trailers "hitch weight" off the car.

Dad said we could use the wheels. We installed the wheels and axle to Rich's cart.
I think this added nearly 50 pounds to the cart.

The day of the race, we won handily. The story does not end here.
Rich took his cart home and told us it would go into storage until the next year.
I did not understand this at all.
I wanted to know, with much nice weather remaining, why not use the cart for more fun on the hill.
Rich would not agree and insisted his cart wold go into storage. I told him, I wanted my dolly wheels back.

We had a little tiff, but we were good friends, so the wheels were returned to me and I built my own cart.
There is still more.
Even with my own cart, the ride down the hill without other carts for competition soon became dull.

A new and exciting idea was born.
On day we gathered large cardboard boxes from the local merchants and stacked them at the bottom of the hill.
One of my friends set the pile of cardboard on fire and away I went----straight through the burning boxes.

Never gave a thought how really stupid this was. But Otto Schultz, who witnessed the action, soon advised us
not to EVER try this again. I remember thinking, what business is it our yours what we do on our own time.
When Otto informed us that he intended to tell our parents about this crazy act, we decided--okay enough is enough.
Lucky I was not injured. The fire was not that large and the speed of the cart took through in fast time.

Still more to come.
One day we were racing down the hill next to the old high school. ( By now, there were a few more home made carts)
I reached the base of the hill, and turned sharpy to the left and my cart flipped over. How exciting and much fun!!
Now you have a little more information about our "Roll Over Carts".

Now we shift to bicycle racing. During this time, Cline's race track attracted us kids big time.
Watching the old stock cars
and hearing the engines roar ( no mufflers of course) gave us a real rush of excitiment.
At the end of each race, we jumped on our bikes and pretended they were motorcycles. We twisted our imaginary throttles
and roared through Mishicot. This gave us another idea, why not have a bicycle race track where we could race each other.

A local resident gave us permission to dig up a circle in the field behind his house. Soon, we really did race with each other.
How I wish I'd taken more pictures back then. Oh well!! The few pictures I did take are here for you to view. Enjoy! 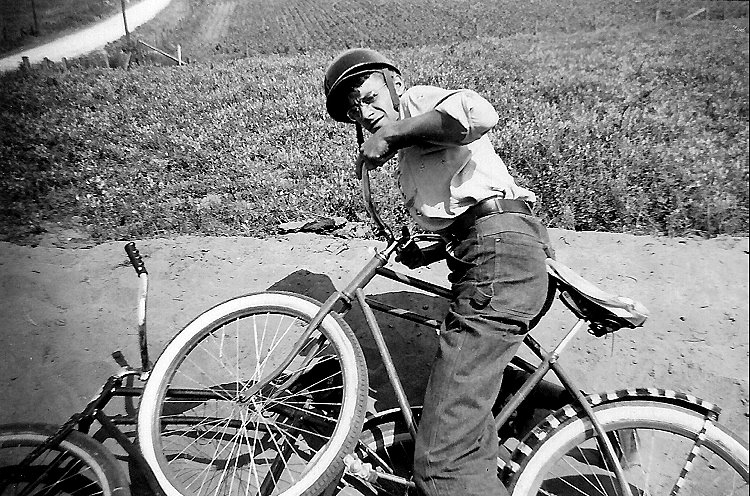 Dave Brouchoud and his racing bike. 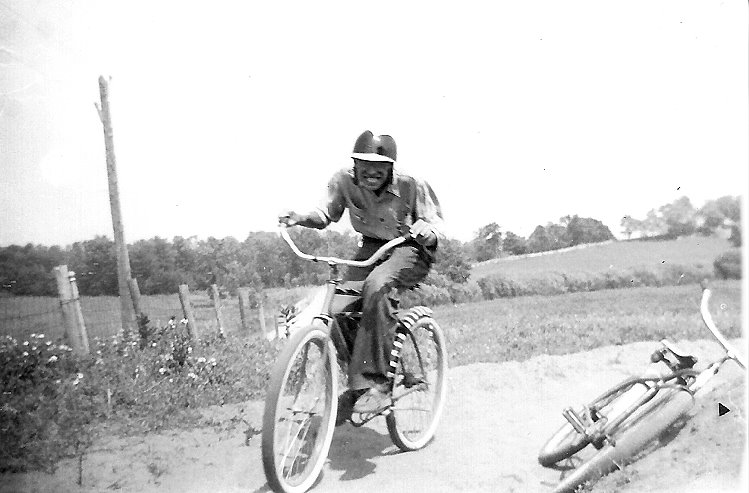 This must have been some serious racing.